We are back on Campus! Class Sessions have resumed in Person.
See Category 2 Covid Precautions

CodeWorks would be nothing without our Amazing Team! Each person brings their own strengths, quirks, and wit that make us the best Coding Bootcamp around. 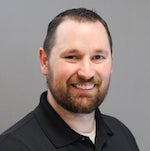 Jake is a Founder of CodeWorks, so if he’s not spending time with his family, you can be pretty sure you’ll find him at the BCW campus - patiently answering questions for prospective students, conducting code reviews for student teams, or building his own software applications.
Like many developers, Jake took a less-than-direct path into software programming. He actually started his professional life with a career in nursing. Jake spent six years in healthcare, seeking out a wide range of responsibilities, from emergency response to hospice care. As his nursing skills broadened, Jake quickly rose through the ranks, finding himself managing whole teams of nurses. With a young and growing family, Jake felt confident that he’d chosen a stable, rewarding career path. Turns out, Jake wasn’t ready for ‘happily ever after’ just yet.
The son of a successful plumber, Jake has always been curious about how things work; whether he was disassembling toys as a child or learning the complexities of human anatomy as a nurse, Jake has an inherent drive to figure things out and try to make them work better. While Jake was learning the ropes in nursing management, he began to consider ways to increase his efficiency. As a manager, one of Jake’s most time-consuming duties was to manually schedule various tasks and shifts for each of his nurses. After discussing the issue with his brother Matt (a software programmer and BCW Co-Founder), Jake figured out that he could write software scripts that would automate those processes, saving himself hours of tedious work.
“I know first hand the fears and challenges of switching careers.” — Jake Overall
Though Jake still enjoyed nursing, he quickly became enamored with the creative, problem-solving nature of writing code. He started coding during his down time, and his passion for programming grew. He enjoyed it so much, in fact, that he decided to change careers — never an easy decision, especially with a young family, but Jake knew he wanted to make it work. With his family’s support, he took the plunge. He left his job to attend a coding bootcamp (similar to Boise CodeWorks), and he did so well as a student that he was asked to be a mentor the following semester.
“I crave the continuous learning and creativity that comes with the daily challenges of being a developer.” — Jake Overall
Since graduating from bootcamp, Jake has been offered many jobs in software development, and he’s been able to pick the ones that speak to his creative, empathetic nature, including building a website that allows cancer patients to connect with one another as a form of therapy.
Although he was happier with these opportunities than anything he’d worked on before, he realized a coding bootcamp like the one he attended could have incredible potential in the Treasure Valley. Having seen the impact of such bootcamps in other cities, Jake realized that, not only could Boise and its surrounding communities benefit from such a bootcamp (he had many friends who wanted to learn), but that it would be the perfect outlet for his own passions for teaching and working with others to solve interesting, real-world problems.
“I love the critical thinking that coding demands. Building each attribute of an application that is user friendly, functional, secure, and visually appealing is thrilling.” — Jake Overall

I learned a multitude of technical and soft skills while taking the course, all of which I utilize in my day to day work. If I hadn't gone to CodeWorks, I'd still be at my dead end job doing work that I hated and wondering what could've been. CodeWorks allowed me to follow my dream.

CodeWorks prepared me very well to get my current job as a developer. After graduation I had multiple job offers. It really helped me change my life.

My experience was fantastic. The instructors are knowledgeable, my classmates have become fast friends, and the material covered is relevant and engaging.

I learned more at CodeWorks in 12 weeks than I did in 4 years of traditional university.

I spent 12 weeks immersed in code learning full-stack JavaScript, C#, and a wide variety of front end CSS design tools and frameworks. CodeWorks delivered on everything promised. Within a month of graduating, I found gainful employment with an extremely reputable local company as their in-house software developer. Thanks CodeWorks

I was really scared about the idea of bootcamps and the idea of quitting petrified! However, I decided to take the plunge. My experience was incredible! CodeWorks has enabled me to completely change my life. I highly encourage you to go talk to them! You won't regret it.